You Become What You Believe 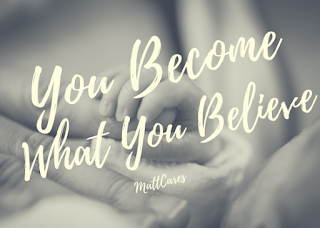 There was this movie I watched. In it, a family was haunted by a stalker. It happened that this stalker was really tormenting each and everyone in this family (the mother, father and their daughter).

What actually caught my attention was when this stalker hacked (He was an IT specialist) into wife's medical report and discovered she went for a cancer test and is expecting her result. This guy called the woman pretending to be a doctor calling from the hospital she did the test and told her that her cancer test came out positive.

As soon as she heard those words, her countenance changed immediately. The next day she started having symptoms of the illness she diagnosed. Her body began to deteriorate...

While the family was finding ways to overcome the torments of this stalker, a call from the doctor at the hospital told her the cancer test result she did was out and she was negative, no trace of the element was in her system and nothing was wrong with her.

As she heard that she had a huge sigh of relief and began to feel normal again from that moment. It became obvious to her that the first caller was the stalker.

After seen all these played out I began to ponder why did she had those symptoms of that cancer despite been negative? Why did her body begin to deteriorate? Why did she begin to feel better after the main doctor called?

As I pondered these questions, the only reason why she had those symptoms or later felt better was that her subconscious mind accepted it and she believed it to be true in both cases.

This further buttress the point that OUR BELIEFS on anything will definitely become OUR REALITY.

The question now is, "What are you believing?"

If you believe that you'll never meet the right woman/man for you and get married, unfortunately, you probably won't.

If you believe that you won't be successful in an endeavour you want to embark upon, be rest assured you won't.

If you believe that this sickness will take your life, it will.

If you believe that you'll never get out of debt, you won't!

If you believe that your life will be filled with complaints, lack and miserable, then that's what you'll keep seeing.

There are no two ways about it.

Now you've known this truth: You're going to BECOME what you BELIEVE. Why not use it to your own advantage?

Start believing that you're blessed.

Believe that whatsoever you're going through is only a phase and you'll come out of it.

Believe that your best days are ahead of you.

Believe that you're gifted, talented, healthy, strong, creative, successful, confident, and a blessing to others.

Believe on these things and expect the best and it will definitely be your reality.

One peculiar thing I've come to realize in this life is that the elements of this world will always conspire to bring your most dominant beliefs to pass for you in your life.

So, it is important you use this power to your advantage.

I do it intentionally after discovered this secret. I wake up and tell myself; It is well with me, man/woman/God will favour me today, I am strong, I am a success, I am a blessing to life and my best days are in front of me. They all turn out to be so for I dwell on these positives and I believe it strongly in my heart to be so for me.

Start believing for the best for yourself.

For you become what you believe.

I leave you with a question: What will you start believing for yourself from now on?

Popular posts from this blog

YOU ARE ENOUGH! (How to stop comparing YOURSELF with anyone on SOCIAL MEDIA)

August 18, 2019
"Every minute you spend wishing you had  someone else's life is a minute spent wasting yours."
That very moment you left her/his social medal wall did you feel inadequate? Did you feel you deserve that same thing they have? Did you ask yourself, why not me? Did you feel like you're not enough? Did you feel less of yourself?
If your answer is yes to any of these, then you have a big problem. You're simply comparing your reality to their highlights.
It's not the best way to live, because that act of comparing yourself to what you see on social media is so counterproductive. It messes you up. It makes you feel anxious, troubled and disturbed. It puts unnecessary pressure on yourself to measure up. It breeds envy and it's a sure path to fall into depression.
My friend the only person you should compare yourself with is man or woman you were a day before. Not them(Social media friends), not anyone but who you are previously.
The thing is that life is a journey …
4 comments
Read more

March 02, 2019
NEVER BEG SOMEONE TO LOVE YOU
Don't ever let anyone make you think or feel that you can't live on without them.
Never give them that power over you, because when you do, they exploit it and treat you like trash.
Love is not something you need to beg someone for.
If He/She wants to bounce, then let them bounce!
See it as their own loss, not yours for losing someone wonderful and amazing like you!
If you know your true worth, you'll never beg anyone stay who no longer want to be part of your life anymore. In fact, it is a blessing in disguise. Their leaving will open doors to important and interesting people who know your value.
See, life is way too amazing and short to waste time with people who don’t treat you right or value your worth.
Yes, you might feel hurt and heartbroken when they go. Do not worry, you'll be fine and even get better in a short while. Stop every form of communication with them, the feeling will gradually phase out
Get yourself together and forge …
Post a Comment
Read more

October 27, 2019
Every expert you know or you've seen or heard of irrespective of his/her field or expertise was once an amateur who barely could find their footing.

That prolific writer that you marveled at each of his work, was once finding it difficult to make out something with words.

That outstanding public speaker, was once so afraid, nervous and shy like a cat.

That amazing artist at one time couldn't make anything appealing on their canvas.

That very successful business wo(man) was once trying just to get by and survive.

Today, their stories has changed.

They never achieved those laudable individual feat in the twinkling of an eye.

It took time, patience, perseverance and persistence, and consistency in whatever endeavor they engaged in until they hit gold mine. Most importantly, they took the first step and they are still improving by the day.

What am i trying to say is that success in life is in stages.

You'll get there eventually, not all at once, but a step at a time.

Etumnu Matthew Chidi
Hello, I’m Matthew! I’m an entrepreneur, Personal development coach/trainer and creative problem solver, dedicated to helping you on self/purpose discovery & bringing out the GOLD in you to live a very fulfilled life. When I’m not helping my clients on their life's journey, you can find me buried in books, spending quality time with family & close friends, or seeing a movie.